Coups de coeur Politique Internationale
By:Blogazoi
Thank you, Madiba, for pardoning my family, me, the whites of South Africa. You're 100, so let's celebrate your example. By Roger Cohen

Nelson Mandela’s Stolen Spoon.Thank you, Madiba, for pardoning my family, me, the whites of South Africa. You’re 100, so let’s celebrate your example.

By Roger Cohen
From the New York Times CAPE TOWN — I go out to Robben Island on a bright clear day with my daughter, Adele, who chose to do her semester abroad at the University of Cape Town. Full circle: My family, Lithuanian Jews, stepped onto the teeming dock at Cape Town in June 1895, with their bundles borne from Europe.
Sunshine, the surf sparkling, Table Mountain tracing a line so flat it seems an apparition. The island, where Nelson Mandela spent 18 of his 27 years in prison, looms. A guide, himself once imprisoned here, tells us we are permitted to look into Mandela’s cell but not to enter it.
“Visitors are no longer allowed in because somebody stole Mandela’s spoon,” he says.
The bowl, the cup (but no spoon), a sleeping mat, a rectangle of blue sky visible through the window — here, in this tiny space, Mandela maintained the captaincy of his soul. Anyone harboring the dangerous illusion of humanity’s perfectibility should remember: A tourist stole Nelson Mandela’s spoon.
It’s the 100th anniversary of Mandela’s birth this month. Celebrations unfurl across the world. He was the master of his fate. The white man’s arsenal could not touch him. It was over. As with Mahatma Gandhi, the riveting inner force prevails.
The spoon-stealers are out there. Sometimes it seems these thieves with their airs, their acquisitive self-importance and their capacity for cruelty to children, are taking over the world.
They are not. Other forces are at work, raising people up rather than casting them down, uniting, not dividing. Mandela chose to confront humanity in its iniquity and vanquish violence in the name of hope.
The 27 years stolen from Mandela by people with white skins, the suffering inflicted on tens of millions of black South Africans over decades, would not be repaid in blood.
Perhaps white South Africans, like my family, got off too lightly. Theirs was a “picnic in a beautiful graveyard,” as Nadine Gordimer wrote.
Then, when it was over, sanctions lifted, they joined the economic world, the sporting world. Suddenly a South African passport was a great thing. They could say, “I never voted for torture!” and forget their complicity in South African policing by pigment — the segregated schools, the forced removal of blacks from their homes, the banishment of blacks to invisible townships of dust and drudgery.

Today, there is a black middle class, but inequality is entrenched. A cry rises from young blacks directed at whites — “Expropriation without compensation!” It’s popular enough to have an acronym, “EWC.” It’s threatening enough to have been taken in hand, as a means to defang it, by Cyril Ramaphosa, the president trying to steady the ship.
For Jews, South Africa was liberation from pogrom, first, lifesaving distance from the Holocaust later. Yet most Jews went along with apartheid — by no means all, however, including several of Mandela’s lawyers. There are more bystanders than heroes in times of oppression. That’s part of the survival gene — even if humanity’s ultimate survival depends on the few who will resist.
South Africa was as good a place as any for a Jew to live in the 20th century. If you’re busy persecuting millions of blacks you don’t have much time left for tens of thousands of Jews. That’s what I heard when I was old enough to hear it.
Thank you, Madiba, for pardoning my family, me, the whites of South Africa, the spoon thieves, today’s political infants, all humanity for its iniquity and tribal stupidity. Thank you for lifting our gaze.
I fly to Johannesburg and go out to Soweto one day. There, I meet Macdonald Maanda Muhali, age 30. He’s been out of a job for more than a year. He used to work as a security guard doing perimeter patrols. Now he watches “Breaking Bad” or “Prison Break” all day on the TV he bought when he had a job. He lives in a single room. The toilet is outside. Job applications go unanswered. Sometimes he washes cars or lays a pipe for cash. His ear is perforated but he says he’s too old now for an earring.
“Do your best,” says a sign on his wall. “God will do the rest.”
I ask this young black South African, raised in the post-apartheid era, if life is getting better. “As long as you are not working, things are not getting better,” he says. Then I ask him if whites got off too easily.
“Mandela forgave them,” he says. “We must trust him. If the people who suffered most forgave, why shouldn’t we?” You feel no anger? “None whatsoever.”
We go out. Garbage skitters across a square. Idle young men chat and smirk. Girls in purple sweaters and gray skirts emerge from school. A woman sells the brooms, rakes and dusters arranged on her head. I buy sausages at a butcher. Muhali, using half a raw onion, scrapes a grill clean. We eat. We laugh.
Thank you, Madiba, for the power of your example. Don’t worry, you’re 100, we’ll find that spoon thief. Their kind will not inherit the earth.

From the New York Times
August 2018 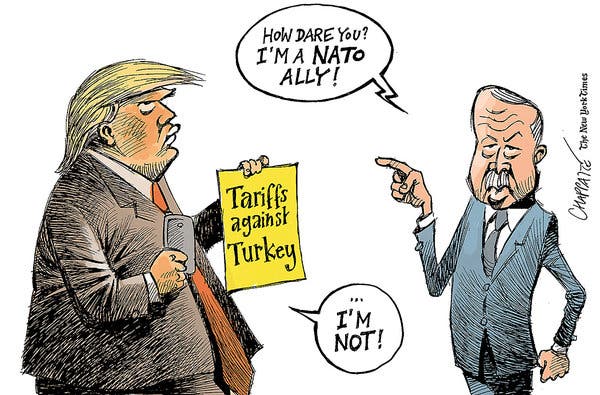